Something very special happened today. The Igloo Choir recorded the vocals for their first single. This song was written by... View Article

Map to Igloo to avoid the B2177 roadblock

Due to the road closure on the B2177, we recommend that clients coming to Igloo HQ from the Portsmouth direction... View Article

This very special and powerful songwriting project was lead by John Gleadall, a local music teacher whose reputation for inspiring... View Article

‘Standard tuning’ refers to the most common way to tune an instrument. There are other ways of tuning that give... View Article

Ukulele Song Sheet Songs in the key of C are great for beginner ukulele players as several chords are one... View Article

Igloo Summer Social – the morning after! 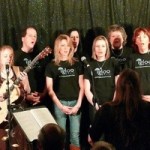