Playing On The Plaza!

Yesterday 30 Igloo Members took to the stage to perform together in front of an audience of 300 sunbathing music lovers on Eastoke Point on Hayling Island. 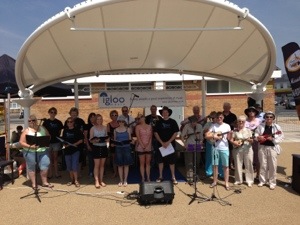 In fabulous summer weather, members from the choir, Hayling and Portchester ukulele clubs, Rock and Blues Guitar group and private singing and guitar students all performed a range of well known cover songs, and received great applause. Many members of the public commented how “the choir sounds great” singing their 3 original songs written by choir members.

After the event, many performers commented on how enjoyable the performance had been – “thank you so much for today – I loved it!!” said Viv, a member of the choir, who had also joined Wendy Adams-Evans, another local entertainer, to sing impromptu backing vocals with Sarah and Tania, fellow choir members.

At the end of the day, after much applause had been heard and much sunscreen had been used, Dale Norman, initiator of Play On The Plaza in 2007, was thrilled with the success of the event. Next Play On The Plaza will be 25th August from 1-5pm.