At Igloo Music we match students with similar goals to each other. This group of Iglooers met through jam nights and various group training activities and formed a band. Here’s some of their story so far… 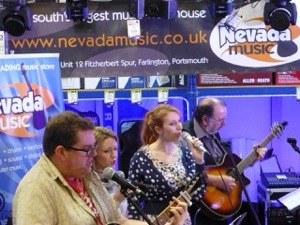 “Quinzhee. Now that’s a great name for a band? Where did it come from?  The band is an evolution of the “group within the group”, called The Rising, that was formed a few years ago. A bit of a long story but to cut it very short, all members are learning/playing/supporting/supported by Igloo music. The members are James, Bob, Cha, Katie and Johanna. James is the most experienced of us all, with a predominately choral background, and as such is able the guide us in our musical and performance activities. He plays bass, guitar, ukulele and is an excellent singer to boot, having joined Igloo’s ukulele group a year ago. All in all, a good all rounder. 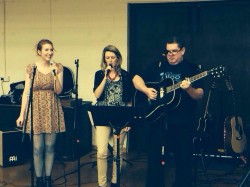 The “father” of the band is Bob, who plays guitar, bass and is learning to sing as well. He  started to learn the guitar with Igloo Music some 4 years ago, and is a regular performer with the Rock and Blues Guitar Group and accompanied the Ukulele group in the recent annual show. Cha is an experienced dancer and musical theatre performer who joined Igloo to develop her singing skills, improve her guitar playing and also wants to learn the bass.

The bass playing challenge is  as a result of a bet with Bob where he will learn to sing if Cha learns to  play bass.  Johanna, an Igloo Choir member for 6 years, solo performer, and founder member of the band, forms the second half or third of the vocal section depending on the line up. She is also learning the guitar. Finally Katie, a singer, burgeoning guitarist and another founder member of the band, forms the final element of vocals. However, since she has a globe-trotting job as airline cabin crew then she cannot always perform with the rest of the band. This then explains the occasional variation in vocal line-up.

Our musical tastes differ considerably, but we do work well together to support each other in our musical development. As a result we have played an eclectic mix of material from ABBA, Green Day, Shakin’ Stevens, Robbie Williams, Bon Jovi, Snow Patrol and even MeatLoaf. We like to think that we will have a go at anything. If it sounds good, then we will perform it.

Now back to the name… Since we are all students of Igloo Music, we feel that we would not be together without the support of DiElle (MD of Igloo Music). As such, Cha informed us of a shelter, similar to an igloo but built of snow rather than ice blocks (Google it and see). And since there were originally 5 of us (and still is when Katie’s rota fits in) then Quinzhee would be a homage to Igloo and also reflect the 5 members. Clever, eh? Watch this space for more info soon.”

Quinzhee are now performing regularly at local events and venues.