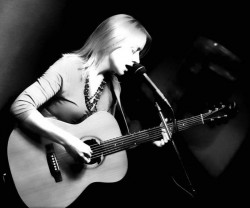 “A little bit about Song Circle…

I play mainly in folk clubs, which I really enjoy. Occasionally though I get asked to play at other acoustic venues and I also play at Open Mics. What I’ve noticed is that despite the musical styles being distinctly similar there is no crossover of musicians, except me! I started to wonder if these two ‘worlds’ were even aware of the other’s existence. In talking to people from both groups I found that there was some knowledge of other musical events taking place but a feeling of trepidation about trying them. ?What if what I do doesn’t go down well?? I think most folk clubs are pretty accommodating even if you don’t plan to sing with a finger in one ear. In fact when I was starting out I would never have had the confidence to sing at an open mic. The folk club singaround was great though and I have gradually built my confidence.

So what is Song Circle?

It’s my attempt to introduce the acoustic world to the folkies and vice versa. It’s a short series of concerts that will each comprise of four acts. Two from the folk scene and two from the acoustic open mic scene. Initially there will be three concerts but I may repeat the process later in the year if it’s successful. The first date is 21st February and that will include myself (well why not? 😉 ), with backing vocals from Sarah Cornick (Igloo Music). There will also be a lovely young female duo called Lilo’s Wall, Nick Tudgey – superb fingerstyle guitarist and Andy Adams – a great singer and guitarist.

Tickets available here:
£5 in advance or £6 on the door.
The other dates in the series are 28th March, and 25th April. These will both feature bands Fox Hat and Quinzhee associated with the wonderful music school Igloo Music UK. More details to follow soon.”
Amy Goddard