Earlier in the summer we received a call to the Igloo Office, asking if we would be available to play with the Igloo Band on 1st of July on Hayling Island Seafront. His Royal Highness The Prince Of Wales visited to lay a wreath at the COPP memorial on the Heritage Trail; a large granite memorial to The Combined Operations Pilotage Parties (COPP) wartime military base, which was set up under the instruction of his uncle, Lord Mountbatten.

Timothy Knatchbull, Prince Charles’ cousin was also in attendance and gave a speech about his father, Lord Mountbatten, and his dedication to the D-Day efforts that took place on Hayling Island.

We were honoured to be asked to play at this event, since the organisers wanted a group with a local connection. Many of our ukulele players and singers in The Big Igloo Band are Hayling Islanders, as many of them attended the Igloo classes at the local community centre.

A choir from a local college also performed a bespoke piece dedicated to our war heroes during the service. 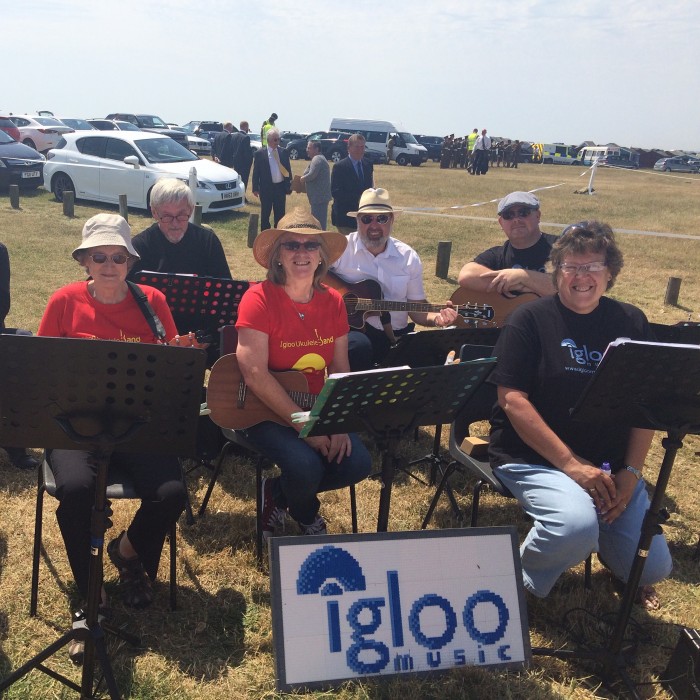 Ten members of The Igloo Band turned out the perform, which was fantastic considering it was 1pm on a Wednesday. It was a gorgeous, hot summer afternoon and the band played for the audience for around 20 minutes before Prince Charles arrived by helicopter. After the speeches and the service, the band played for another 20 minutes approximately, before standing in line to wave the Prince off. He told us he thought “the ukuleles were lovely” and was very appreciative of our performance.

After the gig, our members were all bubbling over, and had our picture taken with some very excited groupie on the beach who thought we were amazing!

We are very proud of the fact that some of our members who did not start playing a musical instrument at all until well into retirement, had the opportunity to play for royalty at this event. Some members have not been playing longer than a couple of years, but the band played very well none the less and did the whole company proud.

Everyone enjoyed the performance “one to tell the grandchildren” says Bridget.